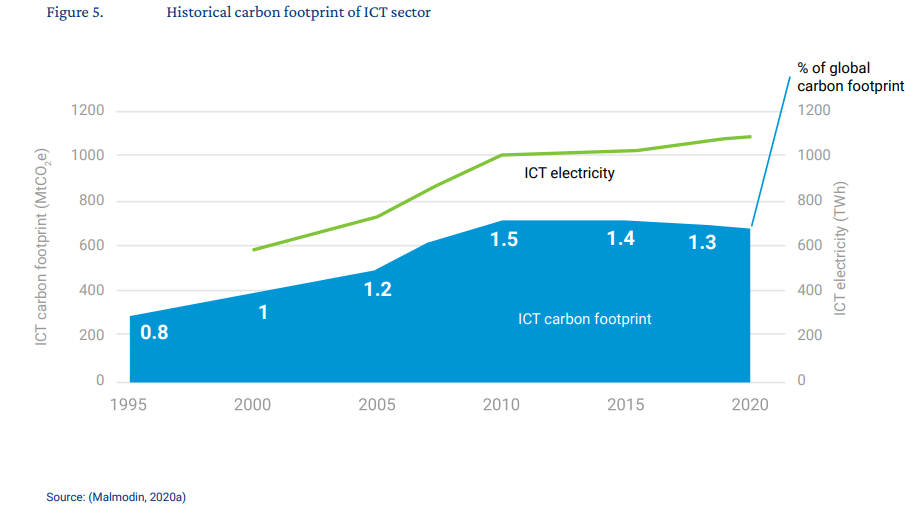 With COVID-19 restrictions in place worldwide, our reliance on digital technology skyrocketed in 2020 as video calling, email, instant messaging, and virtual entertainment replaced face-to-face interactions in and out of the workplace.

At this speed, web traffic will double by 2022, with mobile internet users expected to increase from 3.8 billion in the previous year to 5 billion by 2025, says the IEA.

And all of these online activities need to be powered by electricity, which begs the question of whether this could lead to an increase in greenhouse gas emissions now and in the future.

The picture is more complex than it initially appears, say energy researchers.

For example, an hour of streaming in Europe has a carbon footprint equivalent to boiling a kettle three times or driving just 250 meters, as the analysis showed, while switching to a lower quality video stream made little difference.

In general, the IEA says streaming services of videos and games will drive demand for data center services and will account for 87% of consumer internet traffic in 2022.

A greener future for the industry depends on the source of energy technology companies and how they develop their products, according to experts.

Data centers that process and store data from online activities such as email and video streaming accounted for around 1% of global electricity consumption in 2019, according to an analysis by the IEA.

Despite a 60% increase in demand for data center services, the energy required to power electricity is expected to remain unchanged through 2022, the IEA says, citing a study conducted by American engineering professor Eric Masanet at Northwestern University in February 2020.

“Decarbonising aviation and heavy industry is challenging because many of the technologies we need are not yet commercially available,” he noted.

“Decarbonising data centers is easier: providing them with clean power and driving energy efficiency through policy, investment and innovation,” he told the Thomson Reuters Foundation.

According to Green Mountain, a Norwegian data center company powered by hydropower from the freezing fjords and rivers nearby, cooling can account for up to half of a data center’s total energy consumption.

“Data centers generate an enormous amount of heat and this heat has to be dissipated, otherwise it wouldn’t work – everything would melt together,” said managing director Tor Kristian Gyland.

A Google data center in Finland uses recycled seawater to save energy to cool its servers, while other companies have opened facilities near the Arctic Circle to take advantage of the naturally cold air.

Tech titans like Facebook, Google, Apple, Amazon and Microsoft are all committed to using only renewable energy and achieving net zero emissions within the next two decades.

However, research shows that emerging technologies like cryptocurrencies, artificial intelligence (AI), and 5G networks could slow down efforts to combat global warming from energy consumption.

Studies estimate that digital technologies contribute between 1.4% and 5.9% of global greenhouse gas emissions, according to The Royal Society, a leading UK scientific academy.

In comparison, the transport sector – mainly road vehicles – makes up around a quarter, according to the IEA.

Business leaders in the mining, metals and manufacturing industries are changing their approach to integrating climate issues into complex supply chains.

Developed in collaboration with industry experts, it not only tests the technological feasibility of the solution, but also examines the complexity of the supply chain dynamics and sets requirements for future data usage.

In this way, the proof of concept reacts to the demands of interest groups to create visibility and accountability from the “mine-to-market”.

The World Economic Forum’s mining and metals community is a high-level group of like-minded individuals committed to ensuring the long-term sustainability of their industry and society. Read more about your work and how you can get involved in our Impact Story.

Keeping or repairing a smartphone longer can reduce its carbon footprint when you factor in the “embodied” emissions it takes to make a phone – from mining to manufacturing to distribution, the Royal Society said in last year a report.

Recycling e-waste could also reduce the environmental footprint caused by mining, he added.

The biggest step an individual could take to reduce their video streaming emissions would be to switch their electricity and internet provider to renewable energy companies, said Andie Stephens of The Carbon Trust.

“Every activity we do has a carbon footprint … it’s about keeping this in mind and not trying to make people feel guilty about doing things that have a very small carbon footprint,” he said.

“There are far more important things people can do if they want to change their lifestyle.”

“I’m concerned that focusing on low-emission activities like streaming video could divert attention from other behavioral changes that could actually reduce emissions, like flying and driving less,” he said.

“Although individual measures are important, we need governments that implement strong climate policies in order to achieve structural emissions reductions in all sectors.”

At the same time, many digital technology applications can help reduce emissions, he added, for example by using AI to predict and improve power consumption in the home.

“We need the right energy and climate policies so that digitization helps combat climate change instead of making it worse,” he said.

Aaron Rodgers net worth 2021: How much does Rodgers get from State Farm?

What Is a Home Appraisal, and How Much Does It Cost?

How Much Does Parkinson’s Disease Change Someone’s Personality?

How much does Cristiano Ronaldo earn at Man Utd? Red Devils...

How much is Covid costing the UK and how will we...

How much does the champion earn?