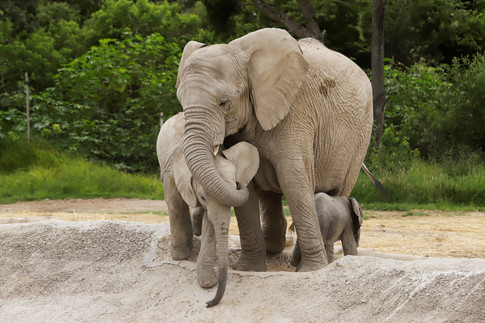 Seven of the world’s most natural national parks, from Angola to Bolivia and Indonesia, are set to receive US $ 1 million annually over the next 15 years to protect and manage their animal and plant species.

These old landscapes – so named for their natural beauty and importance in maintaining the planet’s rapidly declining biodiversity – will benefit from a global fund set to attract $ 1 billion from governments and businesses this decade.

France has also announced that it will pour money into the Legacy Landscapes Fund (LLF) next year, which plans to expand support to at least 30 protected areas if the $ 1 billion target is met this decade.

However, conservationists say it will take far more funding to reverse a catastrophic decline in biodiversity. Scientists warn in 2019 that around one million animal and plant species are threatened with extinction due to human activities.

Why the urgent need to protect nature?

The COVID-19 virus, believed to originate from bats and transmitted through wildlife trafficking networks in Asia, has put the spotlight on the links between the health of the planet’s natural systems, animals and humans.

This has led to a rethinking of how humans treat the environment, with the aim of stopping damage to the climate and nature so that the planet can continue to provide clean air, fresh water and nutritious food.

“Every day we jeopardize these advantages. We are destroying nature and if we don’t change things quickly, we will pay the price,” said British actor, musician and environmentalist Idris Elba this week at the launch of the fund.

“The COVID-19 pandemic is a result of the exploitation of nature,” he said.

“If we continue to destroy ecosystems, the direct contact between animals and humans will increase and that will set the stage for the next pandemic – but we can avoid that,” he added.

The aim is to incorporate this goal into a new global pact to curb the loss of biodiversity to be agreed at a UN summit in Kunming, China, in October.

How much money is needed for nature conservation?

The amount pledged to the LLF so far is a drop in the bucket compared to the hundreds of billions of environmental researchers who are needed every year around the world to keep nature healthy and safe.

Protecting the planet’s plants, animals and ecosystems and repairing man-made damage will require about $ 700 billion in additional funding from governments and businesses over the next decade, a UN funding forum heard last year.

Zac Goldsmith, UK Secretary of State for the Pacific and the Environment, said the meeting of “nature-based solutions” like better forest protection could deliver around a third of the emissions reductions needed by 2030 to meet climate targets.

But such solutions have only attracted 3% of global climate investments so far, he said.

Conservationists have warned that the success of this year’s Biodiversity Summit will depend on rich countries and investors pledging far more money to developing countries, which are home to much of the planet’s threatened flora and fauna.

Climate change is an urgent threat that requires decisive action. Communities around the world are already experiencing increasing climate impacts, from droughts to floods to rising sea levels. The World Economic Forum’s Global Risks Report continues to place these environmental threats high on the list.

In order to limit the global temperature rise to well below 2 ° C and as close as possible to 1.5 ° C above pre-industrial levels, it is imperative that companies, policymakers and civil society take comprehensive short- and long-term climate protection measures in line with the goals of the Paris Agreement on Climate Change.

The World Economic Forum’s climate protection initiative supports the scaling and acceleration of global climate protection through cooperation between the public and private sectors. The initiative works across multiple work areas to develop and implement integrative and ambitious solutions.

This includes the Alliance of CEO Climate Leaders, a global network of business leaders from diverse industries developing cost-effective solutions for the transition to a low-carbon, climate-resilient economy. CEOs are leveraging their position and influence with policymakers and corporate partners to accelerate the transition and see the economic benefits of a safer climate.

Some progress has been made this year with the launch of major new public-private initiatives such as the LLF, the LEAF Coalition to Fund Emissions Reductions from Tropical Forests, and the Rimba Collective, a $ 1 billion drive to protect the forests of Southeast Asia .

But existing protected areas already suffer from a lack of financial support and much more is needed to expand them, officials and conservationists said at the start of the LLF.

What kind of funding is required?

Stefanie Lang, executive director of the LLF, said the fund aims to provide long-term funding to conservation groups, locals and governments who are committed to the sustainable operation of national parks.

So far, internationally funded projects have usually only lasted a few years, which makes it difficult for the beneficiaries to plan for the future.

The LLF will use about half of its money to boost conservation efforts and help local communities make money that doesn’t harm nature through things like ecotourism or payments to keep forests and wetlands intact.

This model will help to prevent so-called “paper parks”, said Lang, where a combined lack of financial resources and technical know-how brings local work too short.

“We hope that with a 15 year commitment we can turn the tide and turn these areas into real protected areas,” she said.

Is it just about animals and trees?

In southeast Zimbabwe, Gonarezhou National Park, one of seven nature reserves to receive LLF funding, is known as the “place of elephants” with around 11,000 large tusks.

It now hopes to reintroduce the rare black rhinoceros to the park after almost three decades of absence.

However, Prudence Ndavani, a procurement assistant at the Gonarezhou Conservation Trust, which manages the park, said it wasn’t just animals that would benefit from the project.

About 75% of the park’s staff – including herself – come from the surrounding communities, she said.

She told the LLF launch that the park’s jobs, along with efforts to help locals find other ways to make a living, played a key role in protecting Gonarezhou’s animals and their habitat.

Lang from the LLF stated that involving the communities from the start was the key to the success of protected areas, especially if these areas could generate sustainable income for the local population, for example through ecotourism companies.

She stressed that the fund will not tolerate violations of the rights of indigenous and other local peoples and will not continue to support protected areas that have not carried out agreed activities such as stopping poaching and deforestation.

“If we find that the impact is not there, that adverse developments are taking place, we will stop funding and withdraw,” she added.

Jude Bellingham Bundesliga fine: What did the England star say, how much will he pay, who is Felix Zwayer?

How much is Dog the Bounty Hunter worth?

how much does coding and programming pay?

How Much Does American Sprinter Allyson Felix Earn and What Is...

How much does it cost to live in West Virginia?